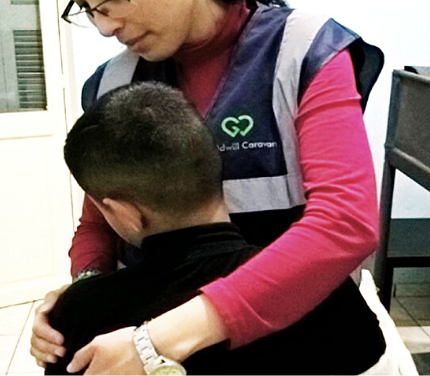 9-year-old Omar and his mother left Iraq in hopes of finding safety and a future. However, this is far from what they found.

Omar’s mother and Omar were packed on an overcrowded dinghy in the cold Aegean Sea during a dangerous winter night whilst crossing from Turkey to Greece.

Terror struck when their dinghy was allegedly capsized, leaving them in middle of the Sea, with no help in sight.

Omar’s mother tread water for hours, fighting exhaustion and praying to keep her son alive in the cold, choppy and high waves of the sea. Omar, when recalling the incident, explained that it was warmer under the water than on top, however, his mother fought hard trying to keep his head above water when finally they were spotted by the Greek coastguards.

He narrowly survived secondary drowning as he was pulled out from the Sea. Omar’s mother held on long enough to see her son was in safe hands and unfortunately did not survive the incident.

The Goodwill Caravan legal team met Omar, alone, detained in a jail cell. Our lawyers got permission from the Public Prosecutors for temporary guardianship for 6 months so he can be released and live in a safe shelter while our legal team work on his case.

With a face against time, we located Omar’s Aunt who lived in Holland. We were able to fly her to Greece to stay with him while our legal team fought for his family reunification case. After 6 months of intensive work, we were able to finally get permission for Omar to travel to Holland to live with his Aunt.

Omar now lives in Holland and has started school. Despite the horrific things he has been through, he can now settle down and begin creating a new life thanks to everyone who donated to our legal service!