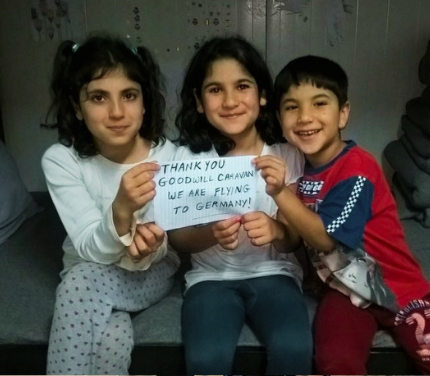 We met little Omar and his 2 siblings and mother, living in a remote refugee camp, north of Greece. The family had been stuck, living in this dangerous and unhygienic camp and being at risk of trafficking, organ trade and abuse for over 2 years as they awaited for their asylum paperwork to be processed.

Goodwill Caravan’s legal team met Omar and his siblings together with their mother at this camp. The mother told our team that she barely managed to pull her children out of the rubble of a collapsing building after their neighbourhood was targeted by a barrage of airstrikes.

With no home and family, she made the devastating decision to leave Syria for the safety of her and her children’s lives and found herself stuck in a refugee camp with no hope for a better future.

The Goodwill Caravan legal team worked tirelessly on their case, and not long after taking on their case, the family finally received the decision that they were going to be reunited with their last surviving relatives in Germany.

Goodwill Caravan work on hundreds of family reunification cases of unaccompanied minors and vulnerable families to bring families that were torn apart due to war and prosecution, together once again to rebuild their lives.

To find out more about our legal service, click here.